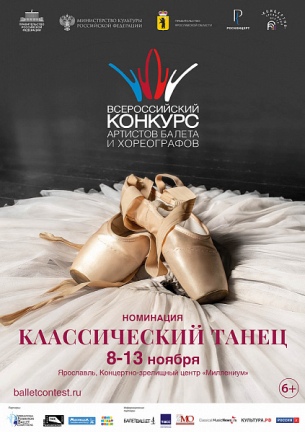 The All-Russian Competition of Ballet Dancers and Choreographers will be held from 8 to 13 November 2020 in Yaroslavl. Completing the four-year cycle of specialties, the largest national show will open new names in the "Classical Dance" nomination. Young talents will compete at the Millennium Concert and Entertainment Center.
On November 8 at 16.00, a press conference will be held in the foyer of the Great Hall with the participation of the honored guest of the Competition, People's Artist of Russia Nikolai Tsiskaridze, as well as members of the jury: the artistic director of the E. Sapaev Mari State Opera and Ballet Theater, the Minister of Culture, Press and Ethnic Affairs Of the Republic of Mari El, People's Artist of the Republic of Mari El Konstantin Ivanov, Director General of the International Federation of Ballet Competitions Sergei Usanov and others.
They will tell in detail about the final of the four-year cycle of specialties, which is the qualifying stage for the XIV International Competition of Ballet Dancers and Choreographers, which will take place on July 5-15, 2021 at the Bolshoi Theater of Russia.


The All-Russian Competition of Ballet Dancers and Choreographers will open on November 8 at 18:00 in the evening of the ballet of the Academy of Russian Ballet. AND I. Vaganova. Its graduates and students will perform excerpts from the ballet by P.I. Tchaikovsky's The Nutcracker (choreography - Vasily Vainonen) and the one-act ballet The Puppet Fairy to music by Josef Bayer (choreography - Konstantin Sergeev), as well as the legendary number Dance of Day and Night from A. Ponchielli's opera La Gioconda.
Competitions will be held on November 10-12 in two age categories: junior (boys and girls from 14 to 18 years old) and senior (men and women from 19 to 27 years old inclusive). The results of the II round will be announced on November 10, the III round - on November 12.

The large-scale out-of-competition program will traditionally present cultural and educational events of various genres: exhibitions, concerts, performances, lectures, film screenings, round tables, etc. Bakhrushin, which will include photos, sketches of scenery and costumes, as well as real ballet costumes and shoes. The vernissage will take place on November 8 at 17:00 in the foyer of the Big Hall of the Millennium Exhibition and Convention Center.

The "cinema" section will show a retrospective of thematic films and animated works, among which are the animated films "Fantasy" (1940), "Ballerina on a Ship" (1969), "Nutcracker" (1973), "Ballerina "(2016), films Galatea" (1977), "Anna Karenina" (1974) and others. The partners of the screenings will be the State Film Fund of Russia, the Mosfilm film concern, and the Soyuzmultfilm film studio.

For the children's audience of the competition at the Yaroslavl State Theater for Young Spectators named after V. Rozov will show the ballet of the Moscow State Academic Children's Musical Theater. N. Sats "The Steadfast Tin Soldier" (music by Leonid Lyubovsky, choreography by Georgy Kovtun). A colorful fairy tale with funny tricks and magic dances will begin at 19.00 on November 9.

Topical problems and prospects of the "Classical Dance" specialty will be discussed by the experts of the "Ballet" magazine within the framework of the "Classical Dance" round table on November 11. The beginning is at 12:00 (conference hall). The second round table, together with the International Federation of Ballet Competitions, will be devoted to summing up and ending the next cycle of the All-Russian Competition of Ballet Dancers and Choreographers and current problems of its nominations: classical, modern, folk-stage and characteristic dance, the art of a choreographer.
Also on November 11 at 19:00 the audience will be presented with the premiere performance of the Mari Opera and Ballet Theater "The Fountain of Bakhchisarai". The ballet was staged for the first time in 1934 at the Mariinsky Theater and became the first ballet and drama performance of the Soviet era. The "Bakhchisarai Fountain" of the Mari Theater is a grand ballet with luxurious decorations, costumes and magnificent duets.

The closing ceremony of the All-Russian competition of ballet dancers and choreographers and the gala concert of the laureates will take place on November 13 at 19:00.

“This year we were waiting for the All-Russian competition of ballet dancers and choreographers with special trepidation, as the whole country yearned for the meeting